Sustainable and Green Chemistry in very simple terms is just a different way of thinking about how chemistry and chemical engineering can be done. Over the years different principles have been proposed that can be used when thinking about the design, development and implementation of chemical products and processes. These principles enable scientists and engineers to protect and benefit the economy, people and the planet by finding creative and innovative ways to reduce waste, conserve energy, and discover replacements for hazardous substances.

Green Chemistry can also be defined through the use of metrics. While a unified set of metrics has not been established, many ways to quantify greener processes and products have been proposed. These metrics include ones for mass, energy, hazardous substance reduction or elimination, and life cycle environmental impacts.

“Green Chemistry is the utilization of a set of principles that reduces or eliminates the use or generation of hazardous substances in the design, manufacture and applications of chemical products”. 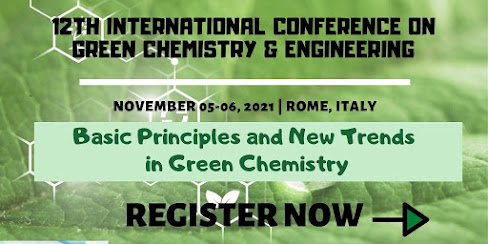 EXPLORE THE CITY OF LOVE; ROME

Grab the chance to explore this city of love by participating in our 2-days conference mainly based on the theme “Emphasize the Biodynamic scheme of Green Chemistry”.

Rome, Italy’s capital is a sprawling, cosmopolitan city with nearly 3,000 years of globally influential art, architecture and culture on display. Ancient ruins such as The Forum and the Coliseum evoke the power of the former Roman Empire. Vatican City, headquarters of the Roman Catholic Church, has St. Peter’s Basilica and the Vatican Museums, which house masterpieces such as Michelangelo’s Sistine Chapel frescoes.

Rome's history spans more than two and a half thousand years. While Roman mythology dates the founding of Rome at only around 753 BC, the site has been inhabited for much longer, making it one of the oldest continuously occupied sites in Europe. The city's early population originated from a mix of Latin’s, Etruscans and Sabine’s. Eventually, the city successively became the capital of the Roman Kingdom, the Roman Republic and the Roman Empire, and is regarded as one of the birthplaces of Western civilization and by some as the first ever metropolis. It is referred to as "Roma Aeterna" and "Caput Mundi" two central notions in ancient Roman culture. In 1871 Rome became the capital of the Kingdom of Italy, and in 1946 that of the Italian Republic.

Rome has the status of a global city. Rome ranked in 2014 as the 14th-most-visited city in the world, 3rd most visited in the European Union, and the most popular tourist attraction in Italy. Its historic Centre is listed by UNESCO as a World Heritage Site. Monuments and museums such as the Vatican Museums and the Coliseum are among the world's most visited tourist destinations with both locations receiving millions of tourists a year. Rome hosted the 1960 Summer Olympics and is the seat of United Nations' Food and Agriculture Organization.

Population: The population within the city limits of Rome, Italy is estimated at 2.8 million as of 2014.Italy’s major cities in terms of population are Rome, which had 3.3 million residents as of 2011, Milan, Naples, Turin, Palermo and Bergamo.

Culture: Rome has been a centre for music with a thriving musicscene as it houses some prestigious music conservatories. It is one of the most popular cities for tourism for it archaeological and artistic treasures, views and unique traditions.

Food: Roman artichokes are world famous dish.Cacio e Pepe and Da Danilo are the famous pasta dishes found in Rome. Culinary traditions stemming from cucina povera, or “peasant cuisine,” can be found across Italy.The city is known as a centre of white wine, especially with the warm territory.

UP TO 50% DISCOUNTS AVAILABLE ON REGISTRATION PAKAGES THAT HOLDS 3 DAYS ACCOMODATION IN ONE THE LUXURIOUS HOTEL AT ROME!!
Book your slots through https://greenchemistry.conferenceseries.com/registration.php
For any queries: greenchemistry@techscienceconference.com

Conference Series greets you to attend the 12th International Conference on Green Chemistry & Engineering, which is going to be held on November 5-6, 2021 in Rome, Italy.  We heartily invite all the participants interested in sharing their knowledge and research in Recycling and Environmental Sciences.

The main motive of the conference is to gather researchers from different areas of Science and Engineering with a common goal of sustainability. The Conference program will be both exciting and ground-breaking in its wide-ranging and multidisciplinary content. In addition to keynote presentations and lectures by world renowned invited speakers, we will be offering workshops, interactive sessions, as well as special sessions.

The objective of this conference is to provide a significant platform to network and meet experts in the field and sampling of the scientific and engineering basis of green chemistry & Technology with specific process as examples.

This conference will be the best platform to explore your research work, innovations and helps to learn how to take advantage of the current market to maintain and grow your business from the leading experts in the field of Recycling.

This conference helps to frame a network with clients, prospective partners, colleagues, vendors and industry leaders and bring all of them in one location. Gathering everyone in one location will save your precious time.

Online learning is not the next big thing, it is the now big thing!

“Demonstrative World for Tomorrow: A New Era of Research Through Novel Analytical Techniques”

Warm Welcome to all as we affably invite you to be a part of the “23rd World Congress on Analytical and Bioanalytical Chemistry” will be held online during July 26-27, 2021

Maria Ramos Payán is Doctor in Chemistry (Ph.D) and she is Professor at University of Seville (Spain) at the Department of Analytical Chemistry. She has also developed her research at the University of Lund (Sweden), University of Copenhagen (Denmark), University of Chapel Hill (North Carolina, USA) and National Microelectronics Center (Barcelona). Her research interests focus on the development of new microextraction techniques and microfluidic devices for applications in the life sciences and pharmaceutical sciences. She has published over 40 scientific articles with Hindex 24.

We are sincerely inviting all Analytical Chemistry Experts who are keen on sharing their research experience and practical knowledge in this arena. This is an astounding opportunity for the representatives from Universities and Institutes to connect with the world class Scientists and Speakers at Analytical Chemistry 2021 to discuss new advances in the field of both analytical chemistry and engineering to improve wellbeing and treatment and furthermore additional innovations. We hope that you will grasp this academic event to revive the enduring associations and glimmer with new companions the world over.

As London is currently subject to national lockdown restrictions, so considering the safety measures, the organizing committee for Analytical Chemistry 2021 has decided to convert this physical conference into a webinar!

A webinar is an online seminar that turns a presentation into a real-time conversation from anywhere in the world. Webinars allow large groups of participants to engage in online discussions or training events and share audio, documents or slides – even when they’re not in the same place as the meeting host or in the same room where the event or presentation is taking place.

• Hard copy of Conference Souvenir, ID card and certificate will be sent to your address

• Online publication of the abstract in the conference website

• Abstract publication in the conference proceeding with the unique DOI given

• Scientific Association, Collaboration and many more..

ReGiStRatIoN pRIces RedUCEs tO HaLF!!

Christmas is on its way!

🎅"CHRISTMAS IS A TONIC FOR OUR SOULS. IT MOVES US TO THINK OF OTHERS RATHER THAN OF OURSELVES. IT DIRECTS OUR THOUGHTS TO GIVING"

🔊Exciting Discounts are going on!! 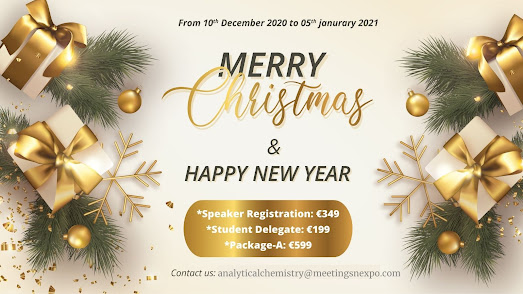 Let's Collaborate with us!

Unique Opportunity! Online visibility to the Speakers and Experts
In today’s economic climate your business decisions are as crucial as ever.
23rd World Congress on Analytical and Bioanalytical Chemistry allows you to maximize your time and marketing dollars while receiving immediate feedback on your new products and services.
Analytical Chemistry 2021 is organizing an outstanding Scientific Exhibition/Program and anticipates the world’s leading specialists from the field of Chemistry. It is an exciting opportunity to showcase the new technology, the new products of your company, and/or the service your industry may offer to a broad international audience.
Lots of thoughts were put together planning to make this conference a premier event. Our worldwide Editorial Board Members of Analytical Chemistry : An Indian Journal , Journal of Analytical & Bioanalytical Techniques and Physical Chemistry : An Indian Journal have agreed to promote and support the event. Exhibiting at this event will attain you with an exceptional format in showcasing your products and services..
We wish to share with the excitement and ideas for creation and exchange of knowledge and information in the scientific field through our Conference with your society members.
We are happy to provide the following benefits on the collaboration with societies/companies :
•Logo and Link of their association website at our Conference home page;
•Recognition listing in the final conference program/proceedings;
•Logo of the Association on the event’s banner;
•Logo on advertising materials, related to the event;
•Verbal recognition at the Inaugural Ceremony;
•Opportunity to take over and organize interested scientific track (s) / session (s) if any;
•Opportunity to organize a symposia/workshop for any interested people from their association;
•Opportunity to distribute brochures/issues during the event;
•Special discounts on registration fee to association members;
All the participants from their Association who take part in the event will get upto 50% discount on the registration fee.
For any queries, you can contact to Ms. Eva Smith, Program Manager for this event at analyticalchemistry@globalannualsummit.com 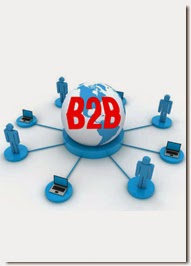 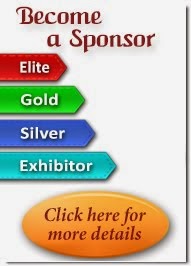